Real Talk: It's Good to Talk

Talking about mental health is difficult. Even writing about it is difficult. As one of the 25% of Scots who suffer from mental illness, it’s hard to admit that it’s still something which is very hard to talk about. Nobody was more surprised than me then, when I told my own story to a sold-out crowd at the Scottish Storytelling Centre on World Mental Health Day.

The difficulty in discussing mental health and mental illness is a problem that Lily Asch, founder of Real Talk, is seeking to do something about. Lily established Real Talk after her own experience of talking about her mental health at a TEDx talk in 2014. The process of crafting her narrative and telling her story publically was very cathartic for her personally but, crucially, it also opened the floor for others to talk about their experiences of mental health.

Since then, Lily has been passionate about creating spaces for people to speak about mental health. A grant from the University of Edinburgh made Real Talk a possibility and the event held at the start of SMHAFF was the third session.  Lily has now been granted a visa on the basis of running Real Talk as a social enterprise: an organisation built to encourage connection, compassion and conversation.

In preparation for Monday’s Real Talk event we met for two storycrafting sessions held at the Scottish Storytelling Centre with professional storyteller Alette Willis. The first session was focussed on mind mapping, writing and storyboarding, which was a really structured and helpful way to work out what our stories were – even if it was incredibly intense to take an unflinching look at some of our painful experiences caused by episodes of mental ill-health.

The second session provided an opportunity to workshop our stories together, and this was a really helpful chance to get supportive feedback from Alette and from each other. One group member was telling an allegorical fairy tale, which characterised depression as a dragon sitting on his shoulder, while another was speaking in her ten-year-old voice to tell the story of a childhood weekend. In comparison, I felt that the story I was telling was trivial: simply about an incident which made me panic. However, my perspective changed as I prepared to tell my story. Telling a story about a time when I felt frightened made me realise that I am strong – not in spite of my anxiety, but because of it. 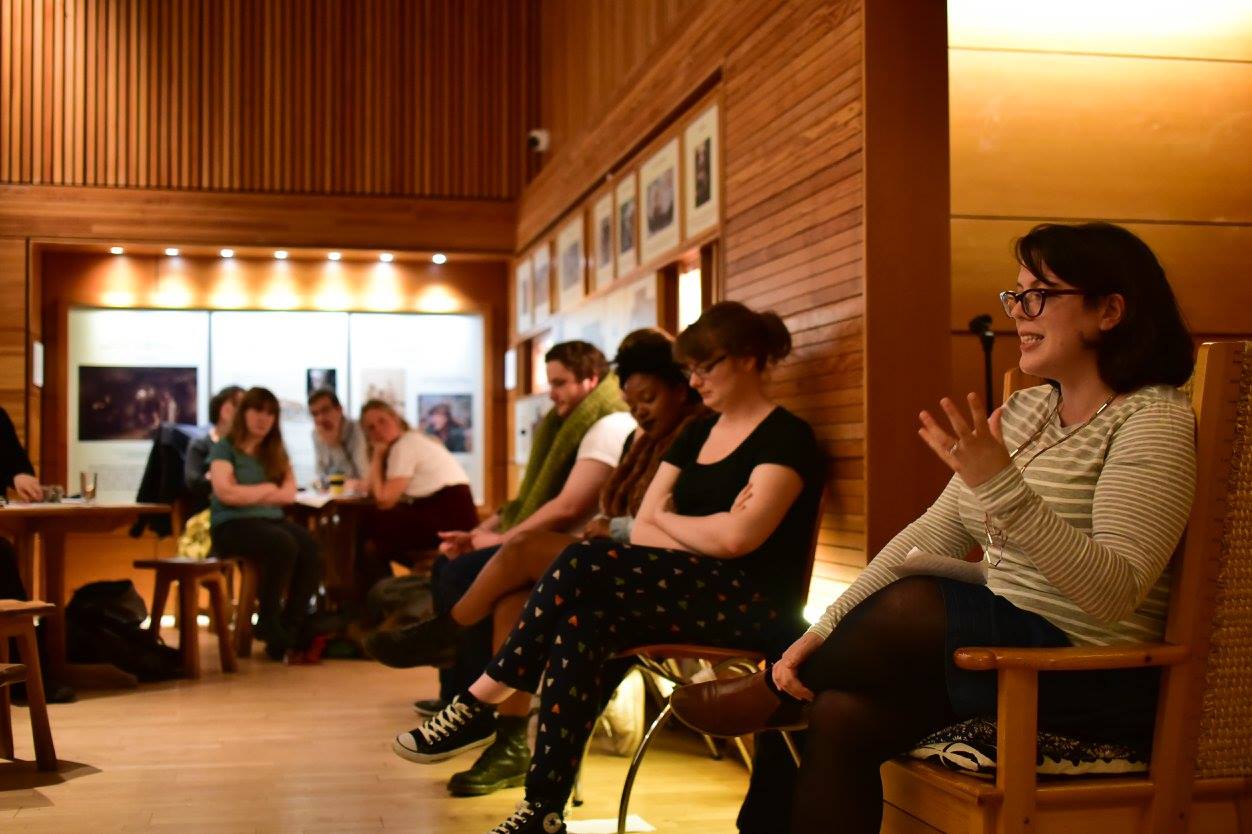 And so I found myself ready to talk to a crowded room about my mental ill-health. It would have been enough for me to simply manage to tell my story but the evening overall was a real success. Each speaker told their story and everyone listened, then, as Lily had predicted, a really wonderful thing happened: in speaking about our struggles, it made it possible for others in the room to do the same. What followed – a really special part of the experience – was an open and honest discussion prompted by questions and comments from all round the room.

I take my hat off to Lily and others like her who are enabling people to talk more openly about mental health. I am grateful to have taken part in this storytelling event – it’s been a really valuable experience for me personally and I’m delighted that it was useful to others too. Living with mental health issues is not easy and perhaps we can make it a bit easier by talking more openly about our experiences.

Check out Real Talk on Twitter (@realtalkstories) and Facebook. The event has also received a lot of feedback from audience members, illustrating the power of discussing our mental health:

"Unexpectedly enlightening. I was in awe at how brave people were in sharing their stories, and I was surprised that everyone led everyday lives."

"Really good - the speakers were incredible and brave"

"I found it admirable that although the stories deal with serious conditions, they were filled with humour. Each story resonated in some way or another with me."

"Excellent evening. Such brave performers who brought so much power to the evening."

"This was an amazing experience, I feel more connected to know other people have struggles and are brave enough to share and make it okay not to be okay."