Good Grief Interview: "It's Always Conversation and Openness That Can Help Us Through It"

There’s something oddly comforting about sitting with a stranger and talking about death. Filmmaker and visual artist Theresa Moerman Ib has curated a selection of short films about loss and death for Good Grief, an event that will take place at Edinburgh Printmakers on Saturday 29 October. “Good grief”, in the curator’s own words, “is when people are allowed to talk about their loss and express their emotions. We just have to remember it’s always the conversation and the openness about it that can help us through it.” As such, the event aims to encourage dialogue about mortality.

Sitting in the CCA cafe, Theresa talked about her own experiences with loss: “I lost my grandparents and my uncle and my dad. I feel like death has been really close in a really short period of time for me. One of the things I realised, especially when I lost my dad, was that there wasn’t much acceptance among others to talk about grief. People were scared and thought ‘we better not talk about it because she might cry’. I guess it’s just our culture, you don’t really talk about these things. Death becomes something that’s just unfortunate, something you just have to push away”.

The short films in the programme have been selected from the 1,600 submissions received by the SMHAFF this year, a number that shows people’s willingness and desire to share their stories. Including titles from Iran, Switzerland, Iraq and Ireland, as well as the UK, this short collection shows the human and global nature of grief. Theresa said: “It’s like there’s a common ground somewhere and we can meet through the act of filmmaking.”

Among the dramas (Ali Kareem Obaid’s crISIS and Jon Barton’s Grey Area) and documentaries (Theresa’s own The Third Dad and (When You’re Not Here) Everything Has a Flatness), Good Grief showcases two touching silent animations: Claudius Gentinetta’s Islander’s Rest and Afshin Roshanbakht and Vahid Jafari’s Lima. Depicting emotions through the use of colours, scores and countless details, while purposely neglecting words, these two films prove that grief can be shared with and understood by anyone, regardless of their own experiences.

Part of the reason festivals like the Scottish Mental Health Arts & Film Festival are so important is that they give independent filmmakers the chance to be heard, especially when it comes to important or delicate topics. But they also offer people the chance to see incredible works – often ignored because they are difficult to sell – which can truly talk to the audience and inspire them to change. 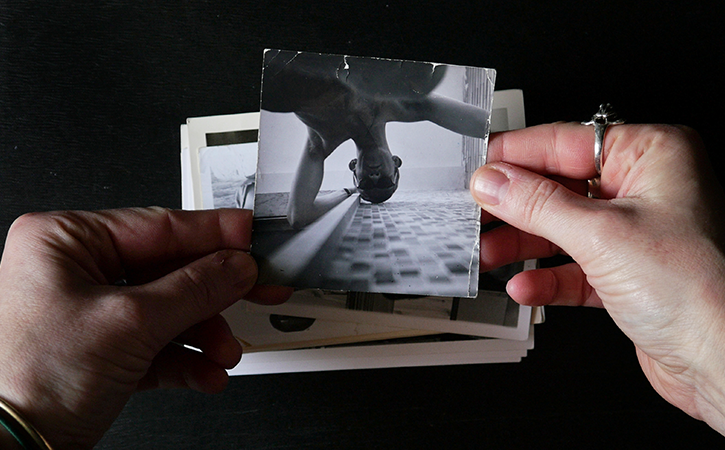 To end our conversation, Theresa gave a good example of this happening: “Last year at the festival there was a film about suicide called Silence of the Flies. There wasn’t a huge audience, but by the end of the film a woman was saying how important it was for her to have seen it, because suddenly she could see what her father had been going through. She said she would relate to him differently now. And that’s the power of seeing these films. You wish you could reach so many more people but festivals like this are a step towards the right direction.”

Good Grief is an unmissable event in this year’s programme. By taking part in a discussion led by Theresa, you might suddenly realise how oddly natural and comforting it feels to talk about death with a stranger. So much so, you might want to repeat the experience, and eventually even find the courage to comfort a grieving friend.

Good Grief takes place on Saturday 29 October from 7pm–8.30pm at Edinburgh Printmakers. Entry is free and tickets can be booked through our Eventbrite listing. Click here for more information and to watch trailers for the film featured in the programme.