Conversations for Change was a public art project about mental health that See Me and CAPS Advocacy ran in Edinburgh in 2015. Last Wednesday saw the book launch of two books produced as part of the original project, and a chance to revisit the central question:

The first half of the event was all about the 2015 project, the people involved, and the various artistic interventions that were used to present people with the question above. The phrase ‘artistic intervention’ was intended as something gentle, essentially going into a space and putting something there that hadn’t been there before. However, it also served to disrupt a social code, namely the idea that we shouldn’t speak to strangers about a serious topic in a public space.

The team initially tested the key question on people they knew, and it soon became apparent that it was simultaneously easy to answer and also really quite difficult. For the purposes of this project though, people could respond with a simple yes or no.

The aim of the project was not to conduct a survey or gather feedback from people about whether or not mental health was a difficult topic for conversation. Rather, it was very much about asking people to stop and think and, perhaps, have a conversation. By the end of the work, the team had taken part in a thousand conversations.

The first intervention was made up of boards along the Meadows, stretching in both directions, with one word from the question printed on each board. Several of the artists stood in the middle with a clipboard and recorded ‘yes’ and ‘no’ answers. Lots of people stopped and talked for a while, showing that what seemed like a closed question was actually a great prompt for conversation. 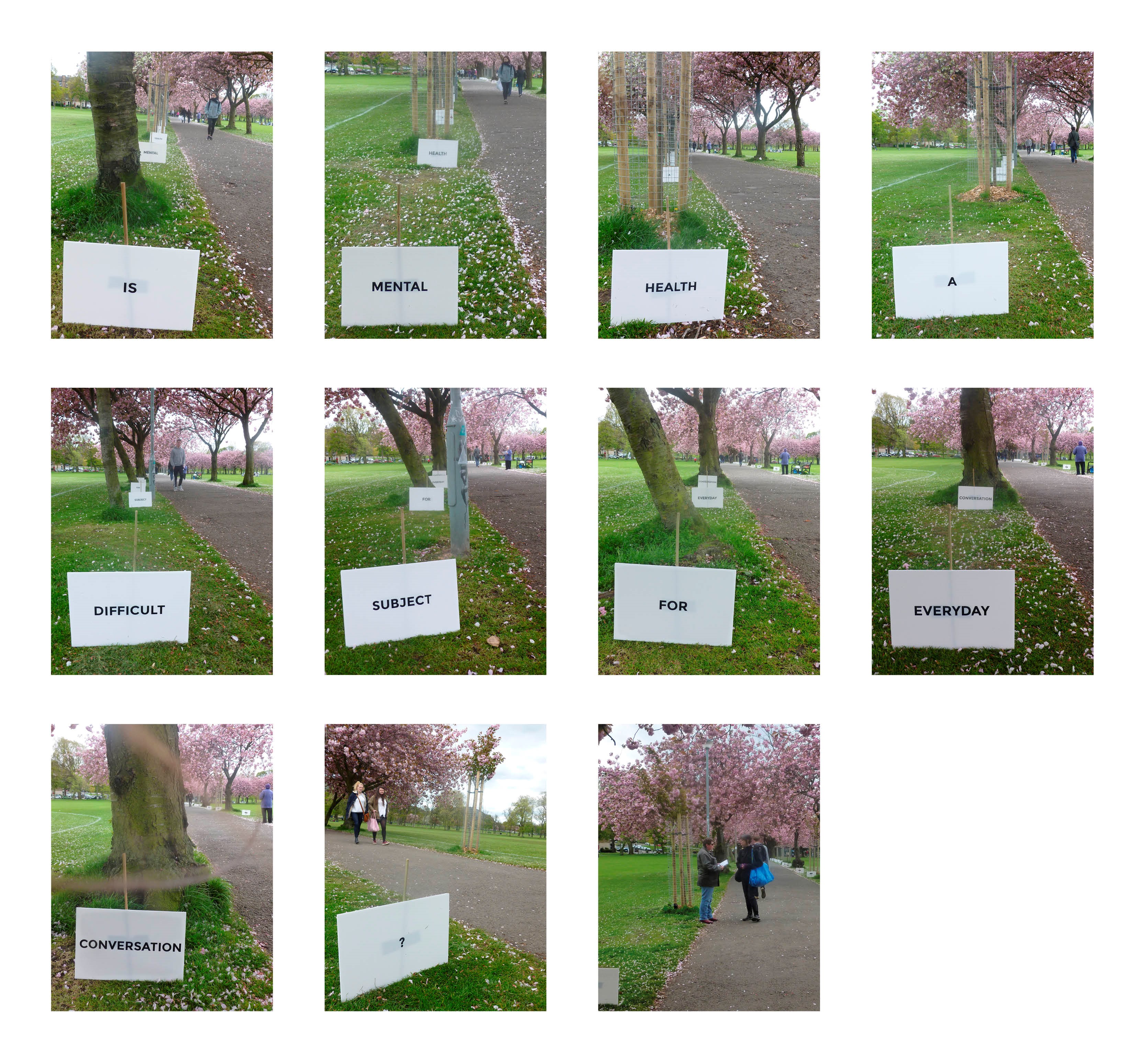 Another intervention involved a flipchart with the question on it that the team displayed in three different locations near workplaces (including inside the Scottish Parliament building) to try and gauge opinion. People were given a sticker and asked to choose whether to put it in the ‘yes’ or ‘no’ fields. This was a very simple interaction, that again generated a lot of discussion. 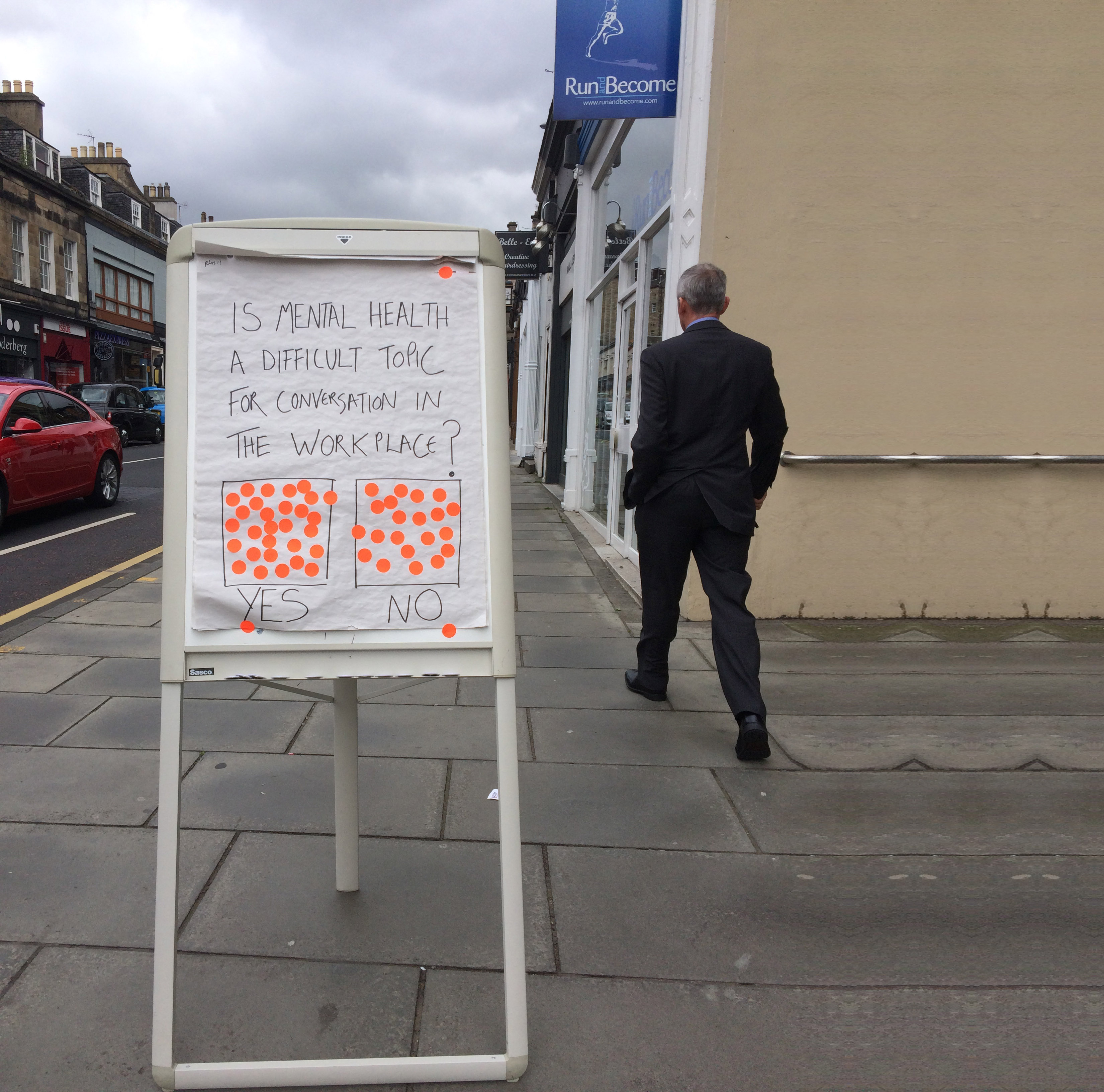 After the final intervention, the project made a film to show at Out of Sight, Out of Mind. It was clear that people still wanted to have the conversation and so there has been life beyond the project. A tour of various cities and venues took place, and the project won the Creative Edinburgh Social Award.

The books have now been printed to keep the conversation going. It’s an important conversation to have. The organisers are happy for people to recreate or continue the project and, as such, have included a set of guidelines for how to undertake the project in the books.

The second half of the event was an open discussion about mental health and how attendees felt about the question Is mental health a difficult topic of conversation…? in 2021.

Mental health issues affect all people, from all walks of life, and it was really positive to have a space to come together and talk about this with strangers.

It was a warm and important discussion, where people initially shared their views about the impact that lockdown has had on these conversations. Some people felt that lockdown had made it more socially acceptable to talk about our mental health, whereas others felt that the pandemic had made it harder to find the circumstances to talk to people, for others.

There was also some really interesting discussion about the structural and systemic changes that need to be made in order to help improve mental health outcomes.

Although, ironically, the pandemic would make the practicalities of this project very difficult, there was clear agreement that it would be fascinating to see people’s answers to the question if it was to be asked again. Perhaps it’s something that you could think about just now:

Rachel is 38 and lives in Edinburgh. Interested in writing, feminism and mental health, she’s an English teacher to trade, and passionate about learning as well as teaching. She loves stories of all kinds, and believes they are a uniquely powerful way of changing the world. Tweets at @rachalexwrites and Instagrams at @rachjanealex.

Images provided by Conversations for Change from the 2015 project.